This is a single blog caption
2021
Textile Weaving in Ethiopia: an unfinished story
Weaving is one of the oldest surviving crafts in the world. It is the primary method of textile production: interlinking a set of vertical threads with horizontal threads. When did Ethiopians start?

20,000 to 30,000 years ago, early humans developed the first string by stretching out and twisting thin bundles of plant fibers together. This ability to produce string and thread was the starting place for the development of spinning, sewing, and weaving. The first known pieces of woven clothing come from Egypt – made from linen around 5000 BC. The earliest example of silk weaving appears to be from China, produced around 3700 BC. From India, woven silk articles started around 2000-2500 BC.

Let’s turn to Ethiopia and what is known about textile development here.

It is not clear exactly when Ethiopians started weaving or from where they learned it. The remoteness of many parts of the country may have forced people to be self-reliant for cloth production rather than dependent on trade. There is a very curious and somewhat mysterious legacy connected to hand weaving in Ethiopia. Tablet weaving is an ancient and complicated form of weaving known to have existed in Egypt and Yemen. Though cotton has historically been grown in Ethiopia, there is no evidence of silk production until recent times.

However, the largest silk tablet weavings in the world are from Ethiopia!

It is generally agreed that this silk weaving was produced during the time of Queen Mentawab – a famous queen of Gondar during the period of 1721-1730. The motifs include the Queen her husband King Bakaffa, and their son Iyyassu II, with angels and guards. Where did the silk come from, how were the colors produced, and who knew how to produce such fine work using the extremely difficult process of tablet weaving? 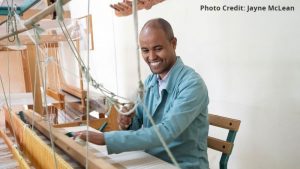 From the first twisting of plant and animal fibers together thousands of years ago, the story of woven textile production is one of innovation and improvement. The foundation of Sabahar is weaving on the extremely simple yet functional two harness looms which can be found in every region of the country. About 80% of Sabahar’s textiles are produced using technology which has not changed for hundreds of years. However, introducing new equipment and techniques is vital to the Sabahar vision. The company believes that looking forward will make the work more efficient and less arduous for weavers and enable a greater diversification of products, thus leading to market opportunities and greater sustainability of employment.

“We have recently requested feedback from our weavers, asking their opinion about the innovations and adaptations introduced”, says Kathy Marshall, Founder and General Manager of Sabahar. Here is a summary of the efforts:

Warping our looms with plied cotton yarns (40/2) on cones enables weavers to prepare their warps much faster and results in a stronger fabric and faster weaving. 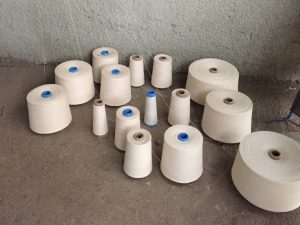 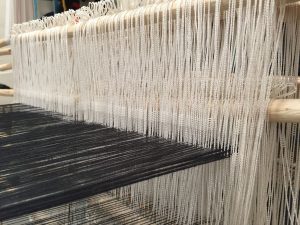 Though most of our weavers were hesitant to increase the number of harnesses from two to four, they are now eager to learn after realizing that their diversity and efficiency can be hugely expanded. Our goal is to equip and train at least 10 home-based weavers with four harness looms.

Updating parts of looms such as the heddles, cords, shuttles, and seats have been greatly appreciated. The very efficient heddles from Texsolv, Sweden, have been especially well-received, and we hope to make these available to all our weavers.

All weavers reported that their lives have improved since working with Sabahar.

The consistent and fair income has allowed our weavers to improve their lives in ways that their parents could not. However, they have a strong desire to see weaving as a profession – rather than a traditional home craft. They would like their work to be recognized as an important contribution to Ethiopia’s economy, rather than an informal, unorganized, and largely invisible sector.

Re-defining hand-weaving within the Ethiopian economy

“Sabahar is committed to hand-weaving, and to doing everything we can to make this sector appealing for traditional weavers and to new artisans. We have realized this will require more than just changing some factors of production, but will also require a re-defining of hand-weaving within the Ethiopian economy. Greater effort is needed to move this traditional sector into the mainstream economy, which will require addressing such issues as policy support, access to improved technologies and raw materials, and increased and more sophisticated capacity to manage within a competitive global textile market.”